Songwriter, writer, singer, illustrator, Professor and Ambassador at University of Coimbra. A million titles wouldn’t be able to define Adriana Calcanhotto. The Multi platinum album seller and Latin Grammy award winner who can surface from widely popular ballads to conceptual art inspired by the greats in Literature and poetry, largely influenced by Brazilian modernism.  The recording artist is the name of her generation who was able to connect the Tropicalia movement by Caetano, Gil, Tom Zé and Mutantes to popular love songs/ hit ballads that served as soundtrack for major success on TV soap opera and Radio. Creating a particular universe merging the bossa nova and samba derivations with modernist poetry, she communicates with the contemporary generation and develops a very particular vocabulary with her voice, song writing and acoustic guitar, eventually building that up to modern arrangements. This non stop communication with the younger generation constantly fuelled her work to remain on the charts. While developing a body of widely successful work, the chameleonic artist creates side projects that are just as relevant: a children’s universe, by the pseudonym Partimpim (Best Children’s Album –  Latin Grammy’s/ Platinum album), Poetry Anthologies (so and so) , there research and work as Ambassador and Professor at Coimbra University in Lisbon, and constantly song writing for other singers such as done on the Best Portuguese song at the Grammy Awards song “TUA” recorded by tropicalist singer Maria Bethania. All of the above have invented a new persona: „Mulher do Pau Brasil”, her latest concert that embodied modernism antropofagia as a manifest. 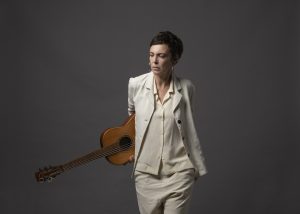