In just five years, the Norwegian producer André Bratten has established himself as a mercurial and uncompromising figure in modern-day electronics. Based in Oslo, the 31-year-old has, across a handful of releases, sketched out an enchanted vision of the world – a kind of psychedelic dystopia – as he seeks to fuel his lifelong obsession with sound. “I’ve always been fascinated by how a sound can make you feel, without being something you can touch,” he says. “I’ve always been more interested in sounds than music.” Setting out his stall on the Oslo labels Full Pupp (with his debut LP ‘Be a Man You Ant’ (2013)), and Smalltown Supersound (the ‘Math Ilium Ion’ mini-album and ‘Gode’ full-length (both 2015)), Bratten soon made a name for himself with a dextrous style of techno that seemed rooted in the avant-garde compositions of Giacinto Scelsi and the romantic pastorals of Boards of Canada. At the time, his live shows and DJ sets on the European club circuit added to his reputation as a serious performer with a dark, cavalier side. But this proved a distraction for Bratten and he chose to step away from the late nights and weekend flights in order to focus on his young family and studio work. Two years ago, Bratten moved from the centre of Oslo to the suburbs. This change of scenery had a positive effect on every aspect of his life. It took him a year to build his new studio in his garden, and then another year to patch all the hardware together again and relearn his music-making process. The first tracks to emerge from his suburban base surfaced last year on Smalltown Supersound as a series of three 12-inches. These are lush, driving funk cuts swaddled in curdled synthesis that find Bratten exploring a new way to conjure the spirit of the acts he loved in his early teens: Boards of Canada, Autechre, and the late Drexciya producer James Stinson’s The Other People Place and Transllusion projects. Three of the series’ softer tracks appear on his upcoming album ‘Pax Americana’ (the title track he recorded the day after Trump’s election victory) alongside three new numbers which add a shade of menace to the record. Bratten deliberately produced these track an old-fashioned, analogue fashion, restricting himself to an 808, an old sequencer, a reel-to-reel tape and a vintage mixer that once belonged to ABBA in the 1980s. Bratten bought the desk from a rockabilly musician in Norway who’d acquired it from a Swedish TV station. Describing the bubblebath boogie of ‘Pax Americana’, he says: “I was trying to make a steady dance record without being swooshy. When I started listening to techno as a kid there wasn’t this melodic stuff, so the record is more of a vibe, a feeling.” Bratten, who cut his teeth working as a sound technician for the Oslo Box Theatre and these days is involved in projects ranging from modern classical composition to film soundtracks, has a pragmatic approach to his work. “I tend to make a record and then forget it. I’m not interested in revisiting them,” he says. “That’s why I always try to do something different when I release a record. Because when I do that record, I am done. 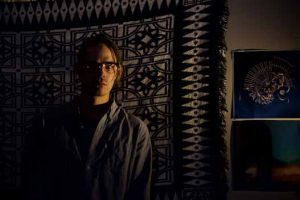