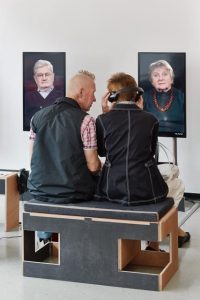 21 – Memories of Growing Up

Artist and story collector Mats Staub explores the many ways in which world history is reflected in personal memory. In 2012, he began research and meeting people at Mousonturm and in Frankfurt for his long-term project “21 – Erinnerungen ans Erwachsenwerden“ (Memories of Growing Up). Meanwhile, he has spoken with over 170 people of all ages and from different parts of the world about their memories of growing up. During their first meeting, he records their stories. When he meets them once more after three months, he plays the audio recordings back to them and films the reactions on their faces. As a video installation “21” shows the storytellers as listeners of their own memories. Simultaneously, the personal memories produce unusual perspectives on our past and present century. “21” was shown at Mousonturm for the first time in 2012 and will now be shown in extended form at the Historical Museum.