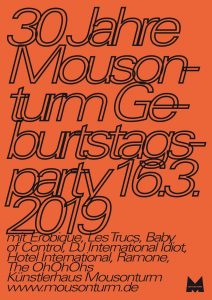 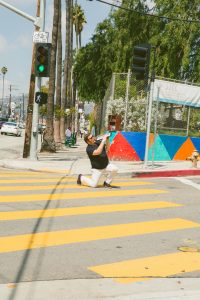 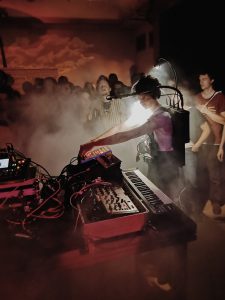 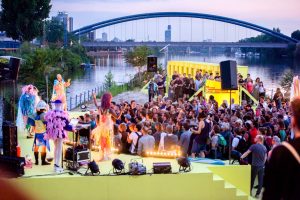 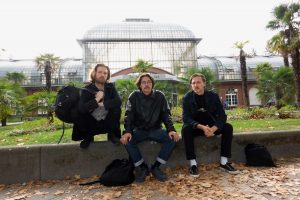 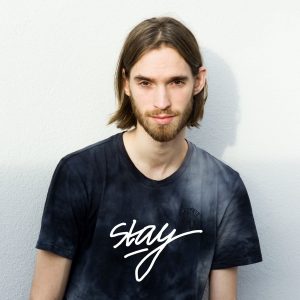 The Mousonturm is thirty and on the 16th March it’s party time! With Carsten Meyer aka Erobique, famous for his anarchic live appearances, his own hits (‘Easy’) and the 70s disco hits he whips effortlessly into a contemporary party sound, with Les Trucs, connecting human robots with electronic devices and famed for their acoustic vivisection of the body (‘Der Fleischgarten’), musical essence and performative brilliance (‘The Greatest Show on Earth’); with a century of pop discourse that storms the stage with the performance project Baby of Control: Triadisches Ballett, Düsseldorf and the 80s, The Love Parade, synth crazes, trance, pop standards, Dadaism, MTV, VIVA, YouTube, Burning Man, free love and pop coalesce into metamorphoses in self-styled costumes and textual chains of association called songs. This covers everything punk and rave have ever been – the show is the message! And the last “real” DJ on the planet, DJ International Idiot, will play vinyl from his amazing record collection. With Giorgio Moroder’s disco sounds he’ll make it clear to the hipsters where all this remake stuff actually comes from. Meanwhile Hotel International provide the complete party experience avoiding exclusive subcultures with bands and DJs ranging from techno to blues. For the 30th birthday party they are joined by RAMONE, famous for his 70s funk, psychedelic rock and electro sounds. Club music in concert from with a minimal cast will be provided by regulars on the scene The OhOhOhs along with their own material: excellent groove based sounds to fill the dancefloor. What more could we possibly want?