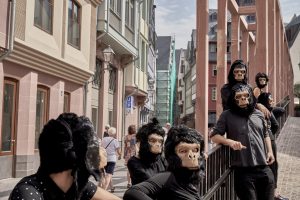 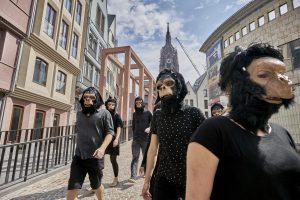 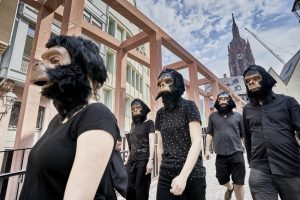 The new Old Town in Frankfurt is an image of the city as a nostalgic,  compartmentalized space with clearly delineated uses: viewing, strolling,  consuming. Here the retouched past and the controlled future combine into the staging of an urban lifestyle in which all Otherness is neutralized. Yet two weeks before its official opening, the backdrop of the Old Town will become the setting of an entirely different (re)enactment: the performance collective LIGNA invites its audience to participate in the execution of a sequel to the science fiction series “Planet of the Apes” in which an alternative future is imagined together. By gazing through the masks of highly civilized apes, we call into question urban spaces with their clearly defined functions. A game begins to see what the future holds. All familiar certainties and values are put on trial – and fundamental questions posed: who are we, what does the city and its architecture do to us, and who do we want to become?