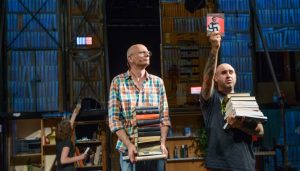 First published in 1925/26 and with over a million copies distributed until the end of the Nazi regime, Adolf Hitler’s hate propaganda Mein Kampf had the aura of ‘forbidden book’ for decades. The property rights held the Bavarian State ended in late 2015. The first new edition of the book immediately shot onto the bestseller lists and was just as quickly sold out. But what does the book really say? Does it pose any real danger in times of growing right-wing and neofascist tendencies? Helgard Haug and Daniel Wetzel developed their piece in collaboration with experts, who out of various biographical, political or professional reasons, were already entangled in the disturbingly active, independent existance of this book before 2016.

In German with English Surtitles.