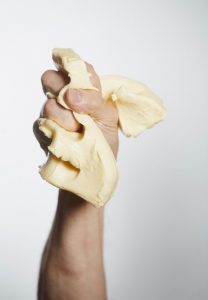 On the day that Bobby Ewing died, Hannes ate no butter. Lili Mareleen sang for Werner and Jochen and the sharks caught fish. Lola ran, while Amélie loved. Everything’s fine, we said and then the machine came… the true story begins in the early 1980’s. A 12-year old boy is kidnapped, held hostage for 7 days and then released again in exchange for 3m Deutschmark. By that time, his father – fiscal expert and passionate Hollywood producer – is already in detention awaiting trial under suspicion of fraud. To this day, most of the ransom money is still missing, while the kidnapper has become a successful inventor and millionaire… Real facts, retold tongue in cheek with great humour and effects as a fragmentary, twisted story composed of various biographies and dissolving shreds of discourse, chock full of common threads and ladders.

By and with Petya Alabozova, Lenja Busch, Benjamin Große, Elena Tirza Rachel Herold, Constantin Petry, Milena Wichert and many more * With kind support of the Hessian Theater Academy (HTA) and the University of Music and Performing Arts Frankfurt.