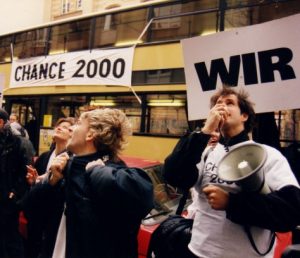 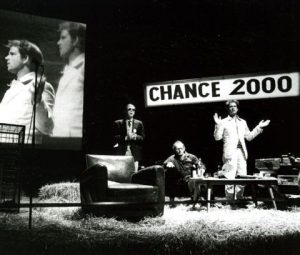 Elect yourself! Failure as chance! Save the market economy, throw away the money! – Thousands rallied under these banners at the federal elections 1998, voted for the Chance 2000 party, founded by Christoph Schlingensief, and in doing so, supported demands such as the acceptance of unemployment as a profession. At party events, even members of Schlingensief’s team could often no longer differentiate between theatre and reality. The film, which premiered in June 2017, is based on as-yet largely unpublished material. Following the film presentation, Alexander Karschnia, former member of the Chance 2000 board of directors, and Matthias Pees, likewise Chance 2000 activist and now artistic director of Mousonturm, discuss the party’s strategies and practice and its still perceivable after-effects.