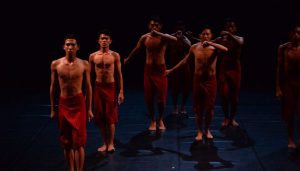 “The future of dance lies under water.”

At least for Eko Supriyanto, one of the leading choreographers of his generation in South East Asia. As a child, his grandfather taught him classical Javanese dance and the martial arts form Pencak Silat. Meanwhile, Supriyanto feels at home on all stages worldwide, where he mixes pop and folklore, classical dance, musicals and highbrow culture. He has danced for megastar Madonna, choreographed opera productions for the theatre grandmaster Peter Sellars and was advisor to the Broadway production “Lion King”. His newest piece “Cry Jailolo” brought Supriyanto to Jailolo, a remote region on the North Maluku island of Halmahera: Jailolo is not only known for its spices, but also for its riffs and its wealth of fish. However, over-exploitation of natural resources and climate change are now threatening its existence and depriving the population of their livelihood. Together with seven young men from Jailolo, Supriyanto has developed a danced act of protest against this state of affairs. They took as a starting point the traditional dance “Legu Salai”, which imitates the movement patterns of shoals of fish. To crackling electro-beats, Supriyanto transforms the traditional dance into a hypnotic choreography that draws the spectator into its depths.