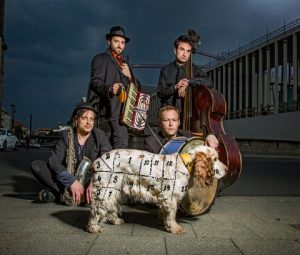 Daniel Kahn & The Painted Bird, the international klezmer band led by Daniel Kahn releases its albums on the celebrated Oriente Musik record label in Berlin. The group’s repertoire features Kahn’s original political ballads together with settings of poems and songs by Jewish writers drawing on the klezmer tradition along with punk and folk influences and an undisguised sympathy for Tom Waits.


“The unexpected highlight of the festival … Creative entertainment, swaying to and fro for the revolution … a furious concert!” (Journal Frankfurt)