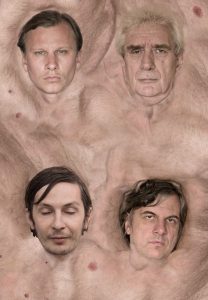 After the enormous success of an utterly sold-out evening in autumn 2014, the Marcuse team – as Ebermann, Schreuf, Spechtl and Stadlober like to jokingly call themselves – return to the stage with their one-of-a-kind show celebrating the great Critical Theorist and exploring in song various sections of his ideology on advanced societies. Neither intended as a didactic play nor as the embodiment of teaching in any way, the protagonists recite, discuss and dispute over whether and why Herbert Marcuse may be wrong in an entirely unacademic fashion and fully dispensing with “common sense”.