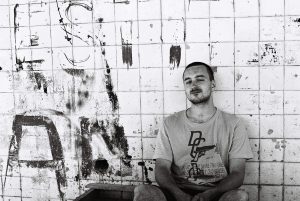 After an excursion to the Alte Oper in September, the Geheime Salon sets out together with Mousonturm into a new season as it prepares the ground for marginal music and electronics. Our guest this month is Ossia from Bristol. His lavish live-sets refuse to adhere to the rules of club and genre conventions, allowing ambient planes to collide with concrete beats and harsh sequences with cascading reverberations. The logical consequence thereof has been releases on Blackest Ever Black and Berceuse Heroique. Before and after Ossia’s set, Jenne will spin some other nice records. As always, the Geheime Salon invites adepts and seekers, producers and dilettantes to stay for a beer or two.

A concert series by Künstlerhaus Mousonturm and MMODEEM, supported by Musikfonds e. V. with project funds of the Federal Commissioner for Culture and Media, Dr. Marschner-Stiftung and Naspa Stiftung.