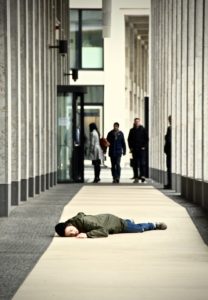 Beyond the economies of the spectacle, theatre faces a little-explored field: the mysterious nature of ordinary folk. On his journey, Frankfurt director Bastian Sistig follows the traces of lexical keywords, collected by the French Tiqqun collective in their Theory of Bloom written in the tradition of the Situationists. Therein, the ordinary takes on the form as those “strangers in the world of the authoritarian community”, in which “dozing and arbitrariness” are considered “widespread life forms”, describing the “doomsday mood of a civilization chained to its deathbed”. Together with his ensemble, Sistig stages an allegory on the desire for importance, the exceptional nature of the banal and the non-actuality of existence. For all, who still find themselves a mystery.