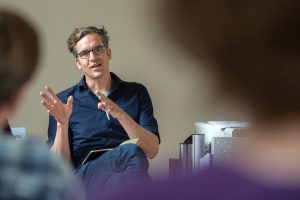 As part of im*possible bodies #2. An Attempted Deconstruction, Diversity Arts Culture will introduce their work and speak about possible key factors for successful structural change, based on the needs of those affected by exclusion.

Mathias Rodatz’s work focuses on the geographies of inequality. He is interested in the interplay of (spatial) processes of marginalisation with the social, cultural or political (counter)movements that they produce. In this context, he specially focuses on the role of knowledge and practices of the state. His areas of interest include migration, citizenship and racism in the neoliberal state, as well as nationalism and belonging in post-migrant society. He is a co-founder and editor of movements. Journal for Critical Research on Migration and Border Regimes. He is also since 2010 a research associate at the University of Frankfurt’s Institute for Human Geography.

Based on the example of the City of Frankfurt am Main, the contribution demonstrates ways in which current urban diversity politics promise an alternative city of equality – and prove to be futile due to neoliberal factors. Mathias Rodatz theorizes them as politics of transnational urban citizenship, whose potential as an effective challenge to state racism in the city has still to be realized.