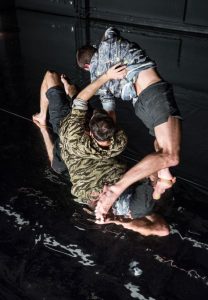 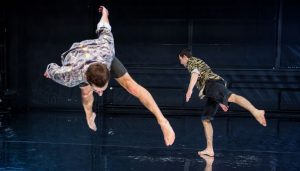 The delighted visitors of the sold-out world premiere series could hardly believe their eyes: in its new duet Eifo Efi, dance collective MAMAZA had created a virtual environment of multiple impressions and complex movement forms The piece focuses on that tempting stimulation, which we experience when eye and mind let go of meaningful and distinct supporting elements, recognizable individuals and defined identities in order to lose themselves in diverse pluralities. The overall picture and the detail, observer and observed merge into a synthesis of unity and multiplicity for all to see and experience. The gaze wanders over fragments of motifs, momentarily captivated by individual gestures, actions and scenes, then is snatched away again, immersing itself in the teeming flood of movements and text, losing itself in sensations. At the same time, resistance arises, almost like a self-appointed mission to search for oneself, for that difference, which makes each of us distinct, recognizable, nameable.