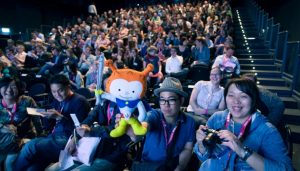 Tadanobu Asano, Japan’s number one star actor, will receive the Nippon Honor Award, sponsored by Lufthansa, at the 15th Nippon Connection Film Festival in Frankfurt am Main. The charismatic actor, currently working with Hollywood legend Martin Scorsese, became famous with his performances in such films as “Shark Skin Man and Peach Hip Girl”, “Ichi the Killer”, and “Electric Dragon 80.000 V”. The biggest festival for Japanese cinema worldwide will honor Asano for his outstanding merit in the field of Japanese film. The Nippon Honor Award will be presented for the first time as part of the special occasion of the festival’s 15th anniversary.

The Nippon Honor Award ceremony will take place during the opening of the festival on 2 June 2015, at Künstlerhaus Mousonturm in Frankfurt. With the support of Lufthansa, Tadanobu Asano will come all the way from Japan in order to receive the award in person. Together with director Kazuyoshi Kumakiri, he will then present the German premiere of the opening film “My Man”. In addition, the horror science fiction thriller “Parasyte” (2014/2015) by Takashi Yamazaki and the drama “Kaza-hana” (2000) by Shinji Somai with Tadanobu Asano will be shown at the festival.