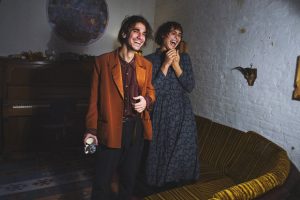 Fake People are the Italian-British musician Olmo a.k.a. Francesco Lo Giudice and his childhood friend Frank Dillane, a Brit mainly known for his acting. Olmo has been around London’s and Berlin’s music scene for a while, mostly with a band and rotating collaborators. After a classical music education and years spent as an electro producer, he has returned to analog, acoustic and fairly esoteric sounds, which still always focus on the song. In 2019, Fake People will release a mini-album that spans a bridge from contemporary Indie-folk to vaudeville from the first half of the 20th century. While that may sound a bit particular, it actually is a real hit and the duo’s fantastic live stage presence never lets it get old.