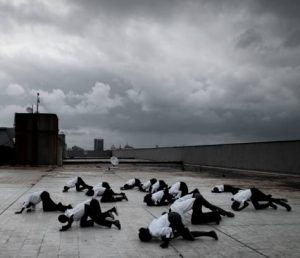 
Inspired by the mythological figure of Mami Wata, a mermaid and water goddess feared and revered along the coast of West Africa, the first part of this video installation is centered around the Famous First Contact between Europe and Africa. Usually depicted with white skin and long, smooth hair, Mami Wata represents the foreign white woman and showcases an African perspective on the foreign continent Europe. What happens when we are the ones viewed from the outside? The entities of both the self and the foreign are shaken in their foundations, the western Enlightenment paradigm of cognition and discovery is faced by the perspective of those recognized and discovered.
In the second part we are transported into the present: the old gods and masters have abdicated, but in regards to cruelties the new rulers do not fall short. Between children’s games and military drill a scenario of affirmation and over-affirmation, of imitation and mockery in the tradition of African-European discourse is created. In this joint production with the youth theatre group ‘The Footprints’ from Lagos/Nigeria, within the framework of the video installation ‘Farewell’ a play and replay space for colonial history unfolds and opens up possibilities to question the repertoire of traditional images in a comic, childlike manner.