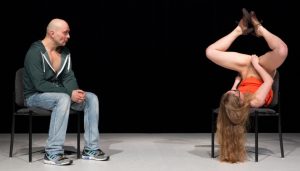 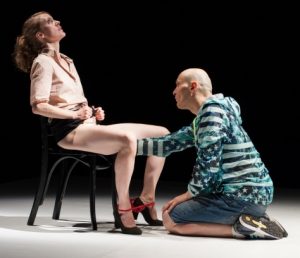 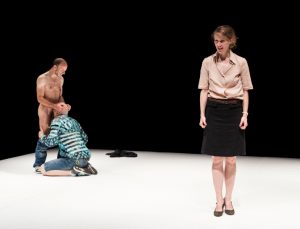 Exploitation and self-humiliation are instruments of the market, even in art. Notorious for his provocative transgression of physical and conceptual limitations, performer, choreographer and musician Ivo Dimchev presents his explicit satire on the art market – FEST – by invitation of this year’s Hollins University summer program: an encounter between an artist, a producer, a technician and a critic at an imaginary festival in Copenhagen.  Relentlessly, Dimchev and his ensemble uncover the fabric of sex and power and reveal in an extremely grotesque way the allegedly libertarian disinhibitions of the art community. “One day, I just realized how bored I was with the conventionality of my everyday professional communications. So I thought that breaking this convention by creating a fictional story would be a good way to go. FEST is absolute fiction and is not based on any real personal experience. Let’s say it’s inspired by some… But mostly it’s inspired by my guilty love for theatre in its more ‘conventional’ setting.” (Ivo Dimchev)