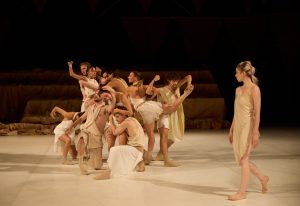 In TRACES, the five ensemble members Felix Berning, Kevin Beyer, Anne Jung, Michael Ostenrath and Sam Young-Wright engage in a collaborative artistic investigation, connecting previous influences on the dance experience with Jacopo Godani’s explorations of movement, while adding their own choreographic contributions. The resulting performance installation resembles a palimpsest – ideas emerge, are complemented by new ones and subsequently overwritten by others. The remaining traces of past and present merge with the young choreographers’ ideas, creating a vibrating, experimental work.

Internationally acclaimed choreographer Jacopo Godani was born in La Spezia, Italy, where he began studying classical ballet and modern dance techniques. He also pursued studies in visual arts at the Academy of Art in Carrara and continued his studies at Maurice Béjart’s international dance centre Mudra in Brussels. Godani made his professional debut in 1988 performing with several Paris-based contemporary dance companies. In 1990, Godani formed his own Brussels-based company and began his choreographic career. From 1991 to 2000, Godani has been a leading soloist with William Forsythe’s Ballet Frankfurt and has collaborated with Forsythe on the choreographic creation of many of Ballet Frankfurt’s most representative pieces. Godani developed his career as a choreographer creating original works for a vast range of international companies such as Royal Ballet Covent Garden, Bayerisches Staatsballett, Compañía Nacional de Danza, Nederlands Dans Theater, Royal Danish Ballet, Semperoper Ballett, Sydney Dance Company, „The Project“ Israeli Opera & Susanna Dellal Centre, Het Nationale Ballet, Aterballette, Les Ballets de Monte Carlo and Cedar Lake Contemporary Ballett. Jacopo Godani has been appointed as Artistic Director and Choreographer of the Dresden Frankfurt Dance Company beginning with the 2015/2016 season.

Felix Berning was born in Datteln, Germany. He began his dance training at the Gymnasium Essen-Werden. In 2014, he enrolled at the Palucca University of Dance Dresden, where he studied classical, contemporary and improvisational dance techniques. During his time in Dresden he appeared in works by Jiří Kylián, Andreas Heise and Felix Landerer, among others. In 2017 he completed his studies, receiving his Bachlor of Arts in Dance. He joined the Dresden Frankfurt Dance Company in August 2016.

Kevin Beyer was born in Greifswald, Germany. He began his dance training with standard and Latin American dance until he discovered his interest in musicals. After moving to Hamburg, he found his passion for contemporary dance and began to take ballet lessons with Víctor Mateos. In 2020, he concluded his bachelor´s degree in dance at the Codarts Hogeschool voor de Kunsten in Rotterdam. Amongst others, he danced in choreographies by Marco Goecke, Hofesh Shechter, Cayetano Soto and Jiří Kylián. Kevin Bayer became a member of the Dresden Frankfurt Dance Company in August 2019.

Anne Jung was born in Groß-Umstadt, Germany. She began doing rhythmic gymnastics as a child, eventually competing in European and world championships and in the Olympics. She later did her dance training at the Hochschule für Musik und Tanz in Cologne. Thanks to a scholarship from Kunststiftung NRW she joined ballettmainz where she was a member of the ensemble under Pascal Touzeau from 2009 to 2013. In addition to Touzeau, she worked with Jacopo Godani, Georg Reischl and Didy Veldman. She joined Nederlands Dans Theater 1 in 2014, performing in works by Marco Goecke, Paul Lightfoot, Sol León, Jiří Kylián, Medhi Walerski, Mats Ek and Franck Chartier. She has been a member of the Dresden Frankfurt Dance Company since 2017.

Michael Ostenrath was born in Aachen, Germany. He began studying at Folkwang University of the Arts in Essen before transferring to the Palucca University of Dance Dresden after his first year. Michael Ostenrath completed his studies there in 2016, receiving his Bachelor of Arts in Dance. He has attended workshops in William Forsythe’s improvisation techniques, in Ohad Naharin’s Gaga technique and with Russell Maliphant. While studying he danced in pieces by Ihsan Rustem, Ohad Naharin and Katharina Christl. From 2016 until 2021 he was a member of the Dresden Frankfurt Dance Company.