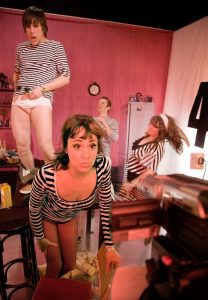 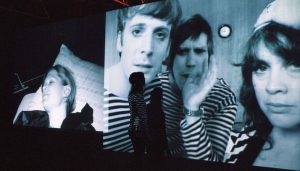 Gob Squad’s Kitchen (You’ve Never Had It So Good)

Gob Squad is back. Back from a trip to their roots. To the beginning. The place where everything started. Where everything is still good. The sex, the drugs, the rock’n’roll. Everything’s ok. And everything remains to be discovered. With a film camera, for example, that Andy Warhol pointed at his friend in 1963 while he was sleeping. Eight hours long. The film, Sleep, is the first in a series of films in which Warhol caught daily life on celluloid. Eat, Drink, Kiss, Couch, etc. followed. In Gob Squad’s Kitchen, the German–English collective tries to encrypt these Warhol classics every night – in the belief that one can only truly understand the essence, humor and spirit of these works by submerging into them, without compromise. In their midst. In search of what keeps us and everything that we do together in the here and now.

In English. Drinks and music by Stefan Raulf after the performance on Fr. 13.9.