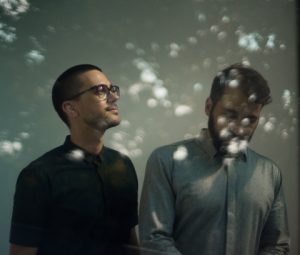 The duo, Erol Sarp and Lukas Vogel, first met seven years ago, forming the synth-free Grandbrothers in Düsseldorf only a short while later. Pairing Sarp’s piano skills with Vogel’s talent for building the formidably intricate mechanics with which he exploits his partner’s instrument and also designing its software, Open explores dimensions at which their debut, Dilation, only hinted. On stage, Sarp works at his ivory keyboard while, from behind his computer keys, Vogel live-samples his partner’s notes, triggering further effects
with the aid of homemade apparatus that physically manipulate the piano’s strings and body. Live, the inventive contraptions at the heart of their work provide a physically astounding and visually astonishing display, so it’s no wonder their music was once memorably described as “open heart surgery on a grand piano.”