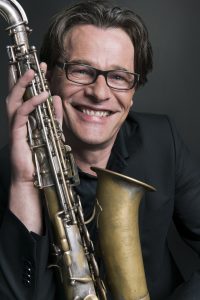 Heinz Dieter Sauerborn is a member of the hr-Bigband, one of the most renowned big bands in Europe, since 1998. His colleagues like to affectionately call their lead alto saxophonist “Heinzi”, and nobody bears this rather old-fashioned name in as dignified a manner as he. You could even say that it has become his trademark. Heinzi is a true Eintracht Frankfurt football fan, and when he’s not sitting in the ranks of the “glorious seventeen” (that’s the title of a book by FAZ journalist Wolfgang Sandner about the hr-Bigband) and playing with greats such as Till Brönner, Joachim Kühn or Richard Bona, he also enjoys teaching the next generation at Dr. Hoch’s Conservatory. Gregor Praml welcomes one of the “old hands” from Frankfurt’s jazz scene to the Mousonturm-Bau for a Sunday morning above and beyond the weekend jazz brunch scene.

Admission to the hall starts 45 min. and ends 10 minutes in advance. Please be on time.
Admission only with face mask! More information on hygiene and safety
Food and drinks in the boxes can only be paid for in cash.