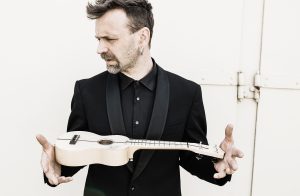 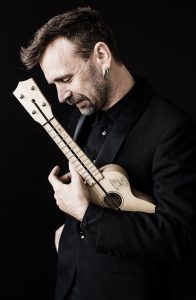 “Iso Herquist is the new Harald Juhnke. Just that he doesn’t smoke. And drinks chamomile tea. He may not be old, but he has a beautifully soulful voice. And is a master on the ukulele. And stylish to boot.” So says the musician, who calls himself by the artistic name of Iso Herquist, while marketing himself as Danish. The man with the ukulele. An anarchist dressed like a dandy. You could just simply call him odd and that wouldn’t even be wrong, but he’s odd with substance. For Iso Herquist is a real musician, who understands something about ukuleles – what’s more, he also plays bass, but “that’s history”, as he would probably say. He enjoys passing on his knowledge, writes music classes about the small Hawaiian instrument and teaches many, both young and old alike, to play it. You want to know what a masterfully played ukulele sounds like? Then come join us at the Mousonturm Lokal!