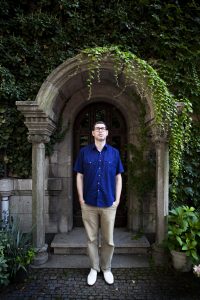 If there were a seal of approval for DJs, it would surely be awarded to: Matthias Westerweller alias Weller. For more than 25 years, he’s been shaking up dance floors across Frankfurt. One of his secret formulas seems to be not committing to a single style. Instead, he cheerfully combines old and new out of a broad spectrum of different genres. He does, however, have a special place in his heart for soul, which is why he co-runs the record label Sundae Soul Recordings. Weller – who also has quite a reputation as a radioman with a show of his own on ByteFM and as co-host of the open-air party series “Lazy” – knows how to set special moods, “organize a musical journey” as he calls it and establish exciting connections. He is the first DJ on the LOKAL Listener stage. All the same, there will also again be a musical encounter with Gregor Praml, for Weller also has a past as a musician. But that is all that we will reveal for now. In German