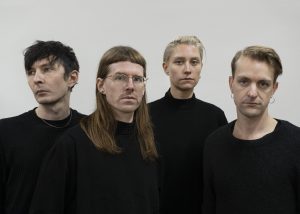 The group Ja, Panik is releasing a new album, it’s called “Die Gruppe” (The Group) and describes themselves, so the obvious questions are: “When? Why? Come again? Why now?” Those are all fine and will have to be answered eventually, but wouldn’t the much better question be, “Where is this coming from?” Because there have always been disputes among wise folk about that – that is, about the cultural biology that says where music probably come from. From the head, some say. From the stomach, others believe. Or: from the genitals. It’s a colourful mix. “Im Gegenteil:/ Wir steigen aus/ wir steigen ein/ denn wer zu lange Gespenst spielt/ wird bald selber eins sein” (On the contrary:/ we’re stepping out/ we’re stepping up/ because those who play at being ghosts for too long/ will soon become ghosts themselves” are the words with which Andreas Spechtl – singer, guitarist and songwriter of Ja, Panik – concluded the book “Futur II”, which was produced by the group in 2016. This too was about how poetry, performance and pop can only ever emerge in a sometimes cruel exchange of contradictions, between consciousness and intoxication, the collective and the individual, commerce and political statement. The verses from the book could be used as a motto for the new record. That exactly where it continues. Or backs into.