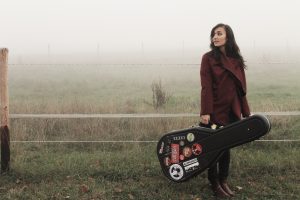 Masterful guitar-playing paired with an enchanting voice and most notable of all: a total lack of pigeon-hole thinking. For Jacky Bastek, good music simply means playing anything that comes to mind. No matter if she’s dealing with Britney Spears’ pop-hit “Toxic” or compositions of her own, it always sounds like Jacky Bastek. In 2014, she stood on stage for the first time as a singer-songwriter. In 2015, she already went on her first tour through England and landed an Internet hit with a million clicks for her song “No Exit”. That following year, she released her first album, produced via a crowd-funding campaign mainly thanks to fans from overseas. Today, Jacky is a mere 21 years old and one of the first to have been accepted to the new “singer/songwriter” programme at the Jazz/Pop department of the Cologne University of Music. Insights into a modern musician’s career and music that couldn’t fit any better to a duo with contrabass – this is the start of the “second round” of LOKAL Listener.