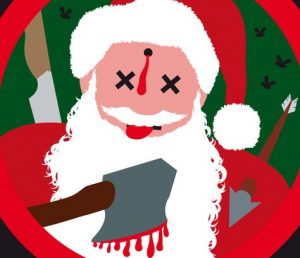 Year after year, German cities are transformed into wooden shack slums steeped in mulled wine. Enough is enough! We want Frankfurt to become the first city in Germany to remain free of Christmas markets – demands Oliver Maria Schmitt, Frankfurt’s mayor of hearts. Together with the satirical magazine TITANIC, he is therefore hosting the Anti-Christmas Market, a great reading extravaganza for the unpresentified, at Mousonturm. Three days of unmerry, unblessed texts and uncontemplative music with artificial snow, cold mulled wine – and the Anti-Santa Claus Schmitt as master of ceremonies from hell: readings in the Saal and cosy mountain lodge magic in the foyer!

Friday (29.11.), the TITANIC TaskForce (Leo Fischer, Mark-Stefan Tietze and Michael Ziegelwagner) hosts a bible study group with music before and after by the one-man rad band ZWAKKELMANN (Ex-Schließmuskel).