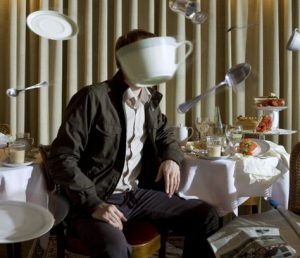 Here we go again. Musician and artist PeterLicht is one of the subtlest observers and most glamorous musicians in the German-speaking music landscape and the only official photos that exist are faceless. After having visited Mousonturm three times before, he now returns as a duo. Accompanied by a pianist, the socially critical Indie pop poet will be playing new and old songs – which are among the best that literate people can listen to, so critics. In PeterLicht’s case, his playful handling of harmonies and melodies corresponds well with the free-flowing texts in search of meaning, which have been also been published in book form and are part of his concerts in the form of short readings. We are proud to once again present: PeterLicht live.