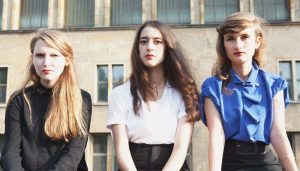 The three musicians of Die Heiterkeit released their first album Herz aus Gold in 2012. And what an incredibly beautiful referential universe it was! Their logo, a smiley with a straight mouth (really a neutraley), cited all Smileys of the world: Aciiid, Nirvana, the MS Word special character chart and emoticons, but unlike them denied any clear ascription of meaning – so quizzical, friendly, sceptical, hesitant. One riddle led to the next; open the matryoshka up and over and over again it reveals yet another matryoshka: be it Neil Young or the Sissi films. Then came the media hype, tours, paparazzi, a new drummer, Anna Leena Lutz, and now album Nr. 2 – Monterey.