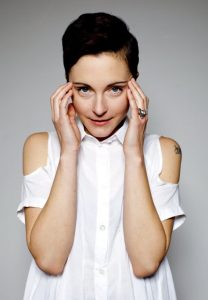 Not one, but two drum sets support the R&B and electro-pop influenced characteristic sound of the American Indie band Poliça from Minneapolis, who have been enjoying success since 2011. In spite of the dynamic lineup, quiet sounds dominate Poliça too: the crystalline-cool, beautiful voice of singer Channy Leaneagh mingles with the floating bass lines and synthie loops into a hypnotic sound that compelled their no less experimental singer-colleague Justin Vernon aka Bon Iver to sing their highest praises, “…best band, I’ve ever heard”. Their ambitious debut album left no doubts as to Poliça’s high expectations of themselves – and now with Shulamith (2013), they have utterly convinced the music world.

Amatorski’s expressivity is rooted in the quiet and calm – and yet, aside from their finely orchestrated folk and pop miniatures, they are also more than capable of bass lines that hit you deep in the pit of your stomach. Add Eyserman’s low, brittle pleading little girl voice to the mix and maybe a reverberating e-piano, which dabs lost sounds into the melancholy void and you feel inevitably reminded of the heart-warming iciness of Portishead. Yet the four Belgians do not let themselves be labelled quite so easily and assert their idiosyncratic magical and fragile sound of quietly glittering ice crystals, caught up in the dark roar of an advancing avalanche.