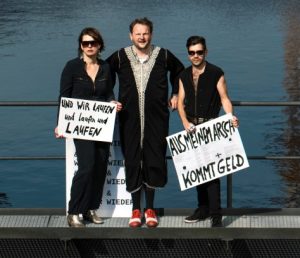 One day, it occurred to Frank Möller that his name, read backwards, simply sounded more sexy. Over the course of his career as a musician, he added melodious neologisms to the anagram: Knarf Rellöm Trinity or Ladies Love Knarf Rellöm. In the same self-ironic manner, he targets rock and pop clichés and packs clever texts into belligerent danceable criticism. At Mousonturm, the unique Hamburger artist will present his new album: A Tribe Called Knarf.