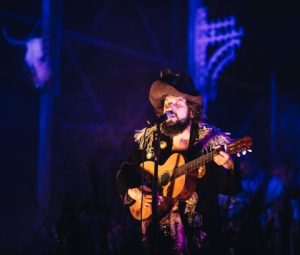 Vinicio Capossela is an Italian singer-songwriter. His style is strongly influenced by US singer and songwriter Tom Waits (Capossela repeatedly recorded his songs with the help of Waits’ guitarist, Marc Ribot), though it also draws from the traditions of Italian folk music. Capossela’s lyrics are highly original and are often inspired by literary sources such as John Fante, Geoffrey Chaucer, Louis-Ferdinand Céline, Oscar Wilde, Samuel Taylor Coleridge and others.