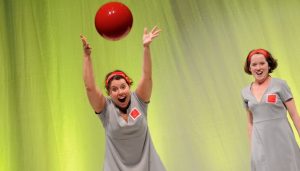 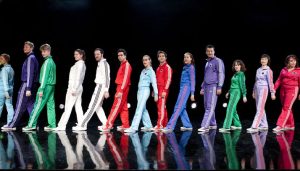 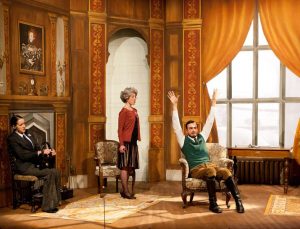 Since Pavol Liska and Kelly Copper’s New York troupe was here last, the Nature Theater of Oklahoma has become a shooting star of the European Theater scene. Now, for the first time in Germany, they will show all four parts of their prize-winning performance-musical Life and Times – individually and as a one-time marathon event that will last over 10 hours:

Pavol is on the phone with Kirstin. She tells him about her life and he listens. It would be nothing out of the ordinary if Pavol hadn’t listened for 16 hours and Kirstin hadn’t simply told him every little memory from 34 years of her life that crossed her mind. In their sensational international hit Life and Times, the Nature Theater of Oklahoma follows the meticulous verbatim transcript of this phone call, including every little hesitation, every slip of the tongue, every sigh, huh and um. Every one of the four episodes so far presents a section of a life history that is so dramatic, insane, extravagant, and above all – ordinary as life can be. For these special representatives of New York’s Off-Off Broadway there is no question that this life deserves maximum amplification by the most effective means in the entertainment business.

Life and Times, Episode 1
How life begins: the first smells, first bruises, first fears, first friends, first enemies. In Episode 1, we experience Kirstin Worral’s telephone memoirs until the age of six: how jealous she was of the toys her friend Johna – the daughter of a local Mafia boss – had, and how she formed the kid’s band “The Homeworkdessedee”, her stern father’s artistic lawn fetish, the honey in her grandmother’s tea, her always barefoot sister and how she got homesick staying overnight at the house of her friend Cindy – all this told with verve, a live music-band and heartfelt song.
Invited to the Berlin Theatertreffen 2010.

Life and Times, Episode 2
It is actually quite astounding that a single evening at the theatre can suffice in order to depict the full drama of everything that occurs between age 7 and 14: the developing body (can exercises increase breast size?), first love (for ever!), the first secretly smoked cigarette (ahhmm…). For Episode 2, the unusual libretto was completely set to music using the DIY music program “Garage Band” – the sound of the eighties wafting through the air. The Nature Theater here continues its remarkable theatrical saga with an impressive chorus line, accompanied by heroic gymnastics and vocal extravagance!

Life and Times, EpisodeS 3 & 4
We’ve finally arrived in the period shortly before high-school graduation: sex, drugs, revolution, religion, desire and pets. In a suspense-packed show, the Nature Theater “goes commercial” with a detective story in the fashion of Agatha Christie’s legendary Mouse Trap and then ends the fourth episode with a hand-drawn animated film – the mother of American entertainment. If you’re worried about not having seen the first two episodes, never fear: as dramatic, opulent or conceptual Life and Times may be – it is all still no more than an ordinary life!