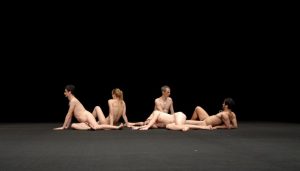 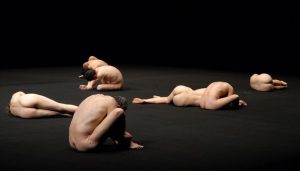 With conceptual severity, a discursive inquiring mind and sly humour, choreographer Xavier Le Roy has stirred up the contemporary dance scene for more than 15 years now and decisively contributed to improving its role in general contemporary aesthetic discourse. Those, who believe that all relevant issues in this field have already been sufficiently worked on, are wrong. And Le Roy’s most recent coup low pieces is explicitly challenges the happy expectations that spectators have of a performance. The evening begins with disarmament talks as the ensemble of internationally renown dancers and choreographers attempt to produce a community of performers and audience on stage. And with surprising matter-of-factness, the gaze tis then drawn to the formerly inconspicuous, to foreign beings, moving with a strange inherent dynamic, wrapping their bodies around each other as they transform into corporeal sculpture.