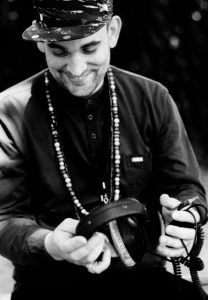 In his series “Come to Dance”, the DJ Manges makes a musical statement, which already earned him sympathies and positive reviews nationwide as a rapper. His fine selection of R’n’B, hip-hop and pop creates a feel-good atmosphere, in which the boundaries between commerce and subculture are blurred and the middle finger is only there to snap your fingers with.

Markos a.k.a. Manges released three albums between 2003 and 2009. He is a member of the production company Kehlkopf Records and DJ at the Weststadtcafe in Darmstadt.