The Rhein-Main Region celebrates the Centennial of Merce Cunningham birth

Merce Cunningham is one of the most famous choreographers in the world. He has revolutionized the understanding of dance and movement with his Cunningham-Technique, philosophy and his constructive-situational approach. His life-long collaboration with John Cage has been influential for the whole arts avant-garde beyond the limits of dance.
Therefore Paula Rosolen/Haptic Hide, Tanzplattform Rhein-Main, Künstlerhaus Mousonturm, the MAK, the Hochschule für Gestaltung and a group of professional dancers, choreographers and dance-amateurs, join forces to pay tribute to the great choreographer. They assemble dance sequences into a large group score, embodying Cunningham’s movement principles and create together an outdoor performance with a live music score by Nicolas Fehr and David Morrow.

Open-Air-Performance at Metzlerpark Frankfurt am Main

Haptic Hide receives multi-year funding from the Cultural Office of the City of Frankfurt am Main and is supported by DIEHL+RITTER/TANZPAKT RECONNECT, funded by the Federal Government Commissioner for Culture and the Media as part of the NEUSTART KULTUR initiative. 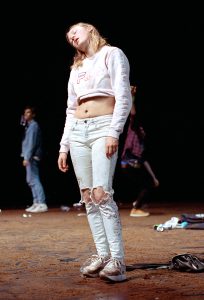