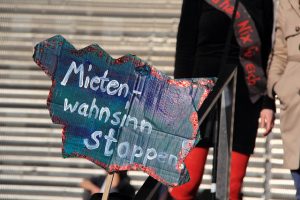 Rent increases are spiralling out of control and threatening the livelihoods of many people. But how can they be controlled? Instead of futilely appealing to politicians, more and more people are joining initiatives and groups to fight for their right to the city. In Berlin, over 20.000 people took to the streets in spring to protest rent increases. In the Swiss city of Basel, a referendum managed to fix rents at a max. one third of a household’s income. And even in Hesse, things are on the move: in Frankfurt a broad coalition of people are working on a rent policy that promotes more social and funded housing. In Frankfurt on 20 October, there will be a mass demonstration of Hessians against social destabilization and displacement. High time to discuss successful strategies for enforcing rent control!