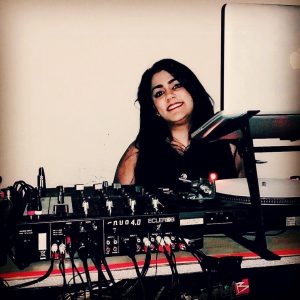 Ms. Hybreedity is a British-South Asian who has been in Germany for over a decade, working in academia and in the social sector on the topics of critical migration and culture. She has researched, worked and published on the topic post-migrant club scenes in Europe and in her freetime has also been working on bringing diasporic South Asian music through deejaying in different left spaces and spaces of solidarity in Frankfurt. She has aimed to introduce the Punjabi music genre of (UK) Bhangra in spaces and to publics that have had no access to these genres, in order to build on, delineate and represent the diasporic music connections in Europe, that go beyond the stronghold and access that London has. Mixing different hybrid forms of music in a male dominant scene influenced her artist name and taking inspiration from Homi Bhabha’s concept of hybrid practices, she named herself Ms. Hybreedity. You can expect the different postcolonial sounds of the UK, such as (UK) Bhangra, House and Garage and dubstep to take you through the night.