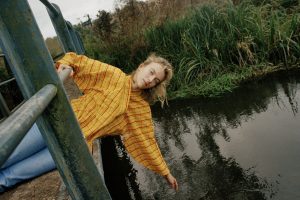 The concert is cancelled. Tickets will be refunded.

Naima spent her early childhood in São Paulo Paulo, Brazil to a Greek/English mother and a Brazilian father. She was exposed to a diverse range of music from an early age. Naima and her family moved to South London when she was seven. As a teenager, Naima began attending shows, mostly at the Windmill Brixton. At the tender age of 15, she and a group of friends decided to start making music which would eventually turn into her first band Goat Girl. After six years of touring the world and playing bass in the band, Naima felt like it was the right time to leave, mostly due to a desire for a change in musical direction. This change has led Naima to her debut album “Giant Palm”, out via Sub Pop/Memorials of Distinction 1st of July. The album’s production and arrangements were crafted by Naima’s long-time collaborator Joel Burton (of the band Viewfinder).