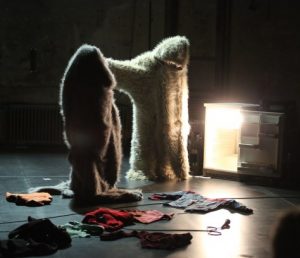 Everyone knows stories of things or people, which or who have disappeared: in mysterious, sad, surprising or planned ways. But has anyone ever actually seen them disappear? And doesn’t everything reappear sooner or later somewhere else? nimmer is Antje Pfundtner’s first choreography aimed at both a young audience from age six upwards as well as at adults. The Hamburg artist uses the stage as a laboratory to deal with impermanence – a central topic in dance – in a literal sense, by actually making herself and the piece disappear. What finally reappears in the end is entirely in the eye of the beholder. Antje Pfundtner has made a name for herself in Germany and beyond with a unique mix of dance, storytelling and music. In nimmer, she once again traces the choreographic power of the seemingly commonplace with whimsical humour and effortlessness.

for all from 6 years, in English or German