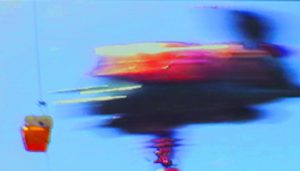 Strangely Ordinary This Devotion (SOTD) is a visceral exploration of feral domesticity, queer desire, and fantasy in a world under threat of climate change. Utilizing and exploding archetypes, the film offers a radical approach to collaboration and the concept of family.

The first iteration of a five-part feature project of hybrid experimental films contemplating a second American civil war via lyrical nonfiction, mixing radio and twenty years of verité footage from the filmmaker’s archive.