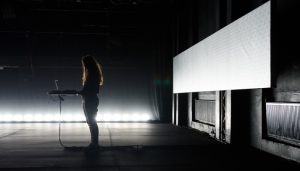 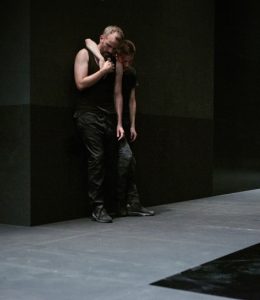 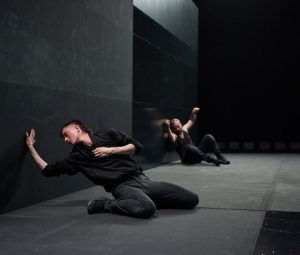 Club atmosphere: restlessly pulsating beats, produced live by Aquarian Jugs aka Planningtorock amidst a minimalist-black stage. Two figures hazily step out into the dark space. Their movements are tentative and groping. A slight sway of the head, a sudden swing of an arm gradually climax into rocking, twitching, circling movements. For the second part of his series o.T., Ian Kaler invited dancer and choreographer Philippe Gehmacher to join him for a multiply disrupted pas de deux. Together they continued to develop Ian Kaler’s unusual manner of movement. Due to his background in the visual arts, Kaler defines choreography as spatial graphic design. The formal reduction of movement creates a delicate dynamic between the two dancers, in which external acts reference internal states of being. The intense choreography, the combination of light and sound creates a hypnotic spell.