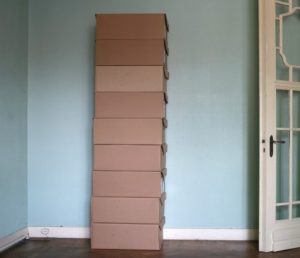 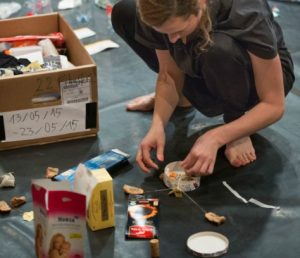 Imagine a place where you re-encounter everything you have discarded, deleted, thrown away or forgotten! Artist Sarah Vanhee meticulously and consistently collected her entire real and virtual trash for an entire year to create a performance that lasts several hours and finally covers the entire theatre space. Minute for minute, sentence for sentence the space fills up with objects, thoughts, relationships, which she had already cut herself loose from. Oblivion fulfills a radical change of perspective filled with devotion and dedication: Every thing is worth something.

In English * By and with: Sarah Vanhee *
Sound: Alma Söderberg & Hendrik Willekens * Outside eyes: Mette Edvardsen & Berno Odo Polzer * Voice: Jakob Ampe
* Production assistant: Linda Sepp * Coproduction: CAMPO, Hebbel am Ufer Berlin, Göteborgs Dans & Teater Festival, Noorderzon Groningen & Kunstenfestivaldesarts Brussels * Within the context of NXTSTP with the support of the Culture Programme of the European Union * Executive producer: CAMPO * With the support of: the Flemish Authorities
Thanks to: Manyone, Kunstenwerkplaats De Pianofabriek & Kaaitheater * Supported by Flemish Authorities * All events of the project series „Tolle Künste“ are contributions to the official programme for Guest of Honour Flanders & The Netherlands at the Frankfurt Book Fair 2016. Funded by Dutch Performing Arts and the Flemish Authorities.