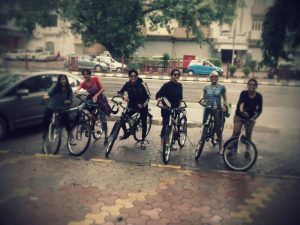 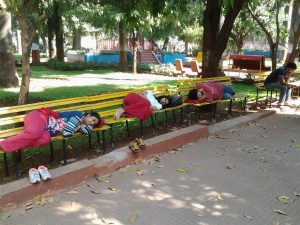 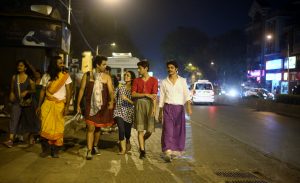 “What happens when an Indian woman decides to walk the streets after midnight just for fun?” This is the question that fueled our curiosity in 2014 after reading the revolutionary book Why loiter? written by Shilpa Phadke, Shilpa Ranade and Sameera Khan. The seemingly innocent book suggested women do something unique and dangerous: to “loiter the streets of your city like a man, without apology, without justification, without fear.”

“When I began loitering, it was a personal project. Little did I know that the small act and the politics behind it would become so popular, and that so many women would take a risk like me. Since 2014, we have loitered in the day and in the night, we have sung, danced, laughed in the most “unladylike” manner, laid down, slept, played games, drunk chai, engaged with fellow men and women and even our harassers and the police on the streets of the city“, describes Neha Singh.

For this, she asks, how does this small and seemingly banal act of an ordinary woman loitering on the streets create a women’s movement – a revolution? Let’s discuss the creation and growth of the “Why loiter?” movement and how it changed the narrative of women’s rights from one of safety to one of pleasure and fun, both in India and worldwide.

Click here to take a look at Neha’s Blog whyloiter.blogspot.com.

—> More informations and the intire festival

Neha Singh is a Mumbai-based artist and activist. She started the Why loiter?-movement in Mumbai in 2014 and was in 2016 named one of the one hundred most influential women in the world by the BBC for her work. She is also a children’s author with a keen interest in presenting gender equality in her stories, poems and essays. She has written ten books and twenty-five stories for children in English and Hindi. Her books have received several nominations and won literary awards. She also runs her own theatre company called Rahi theatre where she produces, directs, writes, and acts in plays featuring complex and strong female characters. She also travels the country with her books and plays. During the pandemic, she became the first member of padsquad, a company that distributes free sanitary pads to women across the country.