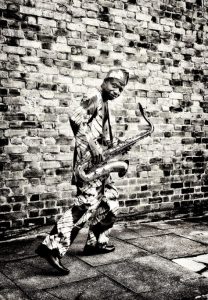 Orlando Julius Ekemonde aka “The Topless Man” is a living legend who is regarded as one of the forerunners of Nigerian music and a pioneer of Afro-soul and Afro-beat. From African Kokoma rhythms to jazz, R&B, funk and American soul to cosmopolitan sounds from Cuba and South Africa, whether played on drums or saxophone, in Ijesa dialect or Yoruba – nothing seems alien to this personable and multi-talented artist with a remarkable ability to capture life and atmosphere. This is also true politically: his album ‘Super Afro Soul’ (1966) created a musical amalgam of the Nigerian independence movement and the soundtrack of the African-American civil rights movement. His rediscovery led to an international comeback in 2000. Since 2014 he has toured with the London-based band The Heliocentrics.