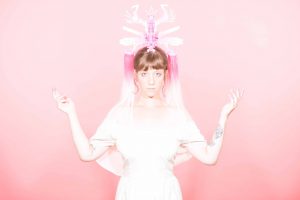 In spring 2018, Anna Aaron’s hit single “Why not?” captured the imagination of critics and fans alike, after four years of silence. Cool and dark electronic sound arrangements connect well to her futuristic, synth pop influenced style. Four performances at the Reeperbahnfestival and a nomination for the popular Anchor Award immediately followed. Her new album “Pallas Dreams” evokes images of Aaron’s childhood in Manila and is an attempt to reconcile the inner conflicts of a child blessed with an overactive imagination under the roof of Christian-religious missionaries amidst a world that appeared deeply and wildly enchanted. After experimenting with acoustic folk and rock on her previous releases and with jazz in her collaborations with Erik Truffaz, the passionate and headstrong musician has now found her very own distinct voice in “Pallas Dreams”.