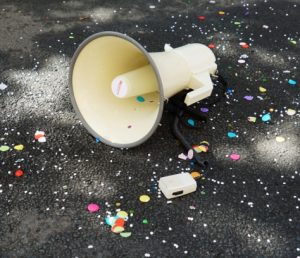 As German federal elections move into their critical phase, red park challenges us to a round of collective insults, to battle the populists out there and inside us. The virtues of obsessive ranting, the fundamental insights gained through rude vulgarities, political change caused by collective brutalization, all this shall no longer remain a privilege of the Others: for three weeks, red park is hosting a series of self-experiments, which conclude with a rant orgy on the afternoon of the federal election (24 September). Then at 6 pm, the inevitable truth will loom on the horizon: we will have had the choice, old sod!

red park launches its series with an afternoon bootcamp against the logic of agitation: Praise the factual! Let the ‘tree of dissent’ grow and thrive. After ‘training in the virtues of ranting and scolding’, we conquer the reticence of the city with processions and amplifiers. Get ready for the supposedly inevitable!

Wasserhäuschentheorie
On three Monday evenings in a row, actually designated and self-styled experts in insulting populists meet up for drinks and talk. Here (dis)like meets (un)truth, joy meets fact freaks and the final say meets the first reason to order a drink. An open table for talks on consumerism, brawling and opinion making.

Kollektive Beschimpfungsorgie
One thing is clear: after the election, things are, as they are. And we’re all in it together. That needs to be celebrated. Ideally from 4 pm, after the countdown has already begun, so that we are prepared. So join us and become part of a collective celebration of insults, packed with (self)incriminations and cathartic purification rituals to celebrate together the loss of our innocence.