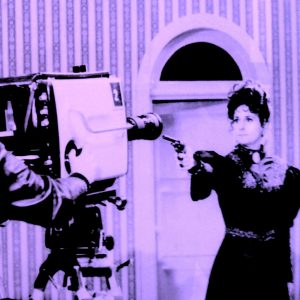 Pretty Woman / That's not my name

“Was wäre, wenn ich Dir sage, dass Du alles getan hast, was Du konntest, aber dann kam jemand und hat Dich sabotiert. Er missbrauchte Dein Vertrauen, zapfte Dein Gehirn an […], während Du gar nicht gemerkt hast, was passiert!“ (Aus: Was Frauen wollen, 2000). (What if I told you that you did everything you could, but then someone came and sabotaged you. He abused your trust, tapped into your brain […] while you didn’t even realise what was happening!)

The discourse-video-walk Pretty Woman / That’s not my name, which moves at the interface between feminist discourse, site-specific performance, film and activism, deals with the narrative modes and power mechanisms in Hollywood films. We will also regard the phenomenon of gaslighting in relation, i.e. the psychological violence with which people are deliberately disoriented, manipulated, and their perception of reality unsettled, in relation to these movies. The (almost entirely) male-dominated narrative within gaslighting and the one-sided representation of women* will be addressed in the discourse-video-walk and placed in a different context. For this new context, we invite theorists, artists, psychologists and journalists to clarify their perspectives in the form of a video contribution. With the various discursive interventions of the experts, the perspective of the women* will oppose the male-dominated Hollywood narrative with a feminist position. During a nocturnal walk in public space, these counter-narratives become visible and audible within the framework of the discourse-video-walk. Places and initiatives in Bornheim that hold a connection with sexualised violence against women* and feminist empowerment will be visited throughout this walk. With a collective walk between flâneuserie and demonstration, we (re-)appropriate the public space at night as a group – without gaslight – but in the light of films and voices that make the perspectives of women* visible.

Following the current corona protection measure, the discourse-audio-walk can be walked either individually or with one’s household and/or one additional person.

The walk takes you through Bornheim, Frankfurt am Main. You can walk alone, in pairs or with your household (subject to the Corona regulations in force at the time). You will need a tablet for the walk, which you can get for a deposit (photo ID) at the first station for the walk. When you sign up, you will be given the opportunity to be assigned to a time slot between Saturday, 22.5. and Monday, 24.5. where you will receive the tablet.

Anne Mahlow and Nana Melling share a long-standing, close collaboration and research in the thematic fields of performance and the moving image, narrative modes and power mechanisms of the film industry, as well as an engagement with feminist discourses. They met in 2012 while studying applied theatre studies in Gießen and realized various research and performance projects together, such as Bildstörung / Interference (ARENA Festival 2016). Together with Asja Mahgoub, Janna Pinser and Sara Hasenbrink, they combine their interest in film and feminist perspectives in the discourse video walk “Pretty Woman / That’s not my name”.

Nana Melling works as a director, screenwriter and trainer for feminist self-defence (Wendo). In various collective contexts she realizes performances, installations and films, with which she has already been seen at the Volksbühne (Berlin), Zeitraumexit (Mannheim) and the ARENA Festival (Erlangen), among others. In 2017, together with Florentine Seuffert, she founded the collective dunkel.bunt, in which they have since been working primarily with experimental explanatory formats. Their works oscillate at the interface of film, cultural education and performance, whereby the theme of crossing borders represents a central starting point in both form and content. She has worked as an assistant director for Hans-Werner Krösinger at the HAU in Berlin, among others. She also directed the radio play Geschichte wie ich einmal versucht habe… for the Bayerischer Rundfunk. In addition to her artistic work, she has trained as a Wendo trainer according to the BVfest quality standards.

Anne Mahlow works as an artist, dramaturge and curator. Solo and in various collective contexts, she creates performances, installations and audio walks, which she has already shown at the Staatstheater Darmstadt, Mousonturm Frankfurt, FFT Düsseldorf and the Ruhrtriennale, among others. She is part of the performance collective imaginary company, with which, among other projects, the performative audio walk Schulausflug (Mousonturm Frankfurt 2019/2021, Augenblick Mal! Festival 2021) was created. In 2016, she founded the Hungry Eyes festival in Gießen which holds a focus on film at the interface of performance and visual arts, and which is collectively directed. From 2017 to 2020, Anne Mahlow was part of the dramaturgy team at the Ruhrtriennale, where she worked as both dramaturge and curator. As dramaturge, she worked with Jetse Batelaan, Schorsch Kamerun, Akira Takayama and realized the video installation Αλληλεγγύη about solidarity together with Barbara Ehnes. She also curated a programme of performances, discourse formats, concerts, workshops, etc. for the Third Space designed by raumlaborberlin as part of the Ruhrtriennale from 2018-2020.