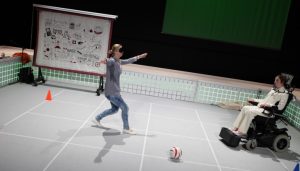 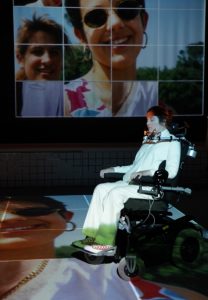 Just after graduating high school, Maria-Cristina Hallwachs accidently jumped head first into the shallow end of a swimming pool. She has been paralyzed from the neck down ever since. In this piece by the prize-winning Berlin documentary theatre label Rimini Protokoll, Hallwachs explains very matter-of-factly and with great humour the entire “apparatus” that she now relies on – both off as well as on stage. Her reflections extend far beyond her own individual fate: where does disability begin? And who decides whether a life is worth living? Her answer is clear: Only she herself can and may do so. “I’m 40 years old now and I am prone. Prone to death. Prone to life.”

In German with English Surtitles